Last week was a tough one.  Due to the bad storm which encased the cars and streets in a sheet of ice (basically), a lot of Sam’s regular activities were canceled.  So we got a little cabin fever.  I also hit my 31st week of pregnancy, which seems to be a milestone for all sorts of uncomfortable pregnancy symptoms!  On top of the usual itchy skin,  the bothersome sciatic nerve, and the occasional 3AM “wake me up” leg cramps and subsequent loss of sleep, I had to deal with a sharp, shooting pain in the lower right part of my back.  I thought it might be temporary and would just go away immediately.

After the 2nd day though when I found it hard to walk (or carry a suddenly clingy toddler), I called the Midwife hotline (Unlike in Manila, here you don’t go rushing to the doctor for every weird symptom.  They give you an advice line or a pager number to call and they will diagnose you over the phone). To make a long story short, I was phone-diagnosed with spinafia-disjointia (or something similar.  I’m not a doctor, how should I know!). It’s an inflamed, dislodged joint or nerve that connects the base of my spine to a part of my hip.  It was an aftermath of a combination of carrying a 25-lb toddler, and the movements of the 3-lb infant in my belly who may have “hit a nerve”, so to speak.

As with many pregnancy symptoms, I was told to ride it out.  This time, she meant it literally because I now had to strap in and wear these:

Why does it always look more glamorous on pack than it does on me?!

Maternity support belts / braces / harnesses — whatever you call them.  They’re actually quite similar to the girdles I would see my mom wear when I was about 10 years old.  In fact I remember thinking back then, that you know you’re 30+ with kids when you find yourself in a girdle.  True enough, here I am.

I admit it is helpful.  It keeps the belly from sagging and my back from aching.  But still, I can’t shake the image in my head of me being quite similar to a hippo in a harness.  You’d think the pregnant women on the packaging would help you feel better about the whole thing, too.  On the contrary, I cannot relate!  I am definitely not as unfazed or as glamorous as they are, and to think that these were already the more comfortable choices I had.   The bigger one can get quite itchy  if worn for over long periods of time, and the seamless one rides up so it’s like there’s a tootsie-roll salbabida (English = those round lifesavers on boats) under my pants.  Both say that you can wear it comfortably under clothing — aha — NEVER BELIEVE IT!  Plus everytime I try to get myself into them, Sam is watching me with her head tilted to one side, as if to say, “what’s going on?!” 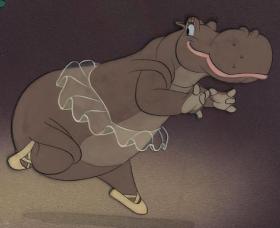 There is hope for me yet...

Ahh well.  Such is a pregnant woman’s life ey? At least I know one thing — hippos can wear tutus too.