Normally during winter I prefer to stay indoors and under the blankets.  I understand why bears hibernate; it is the best way to go!  Sadly I am not a bear (even if by now I probably approximate the size of one), and I have a toddler who cannot be contained in a 2-bedroom apartment for over 24-hour time periods.  We both end up stir crazy, and in front of the TV all day. Not good.

Occasionally when there is snow, we go outside, layers and all.  Sam loves it, and I suppose she doesn’t mind the fact that she can’t feel her fingers or her nose turns as red as Rudolph’s.  I of course I mind — because it means runny noses, petroleum jelly, and more laundry after.  Plus, a pregnant woman can only stand the freezing air for so long before she needs a bathroom, and getting in and out of those layers… have mercy!

So the goal was to find new indoor play areas for her to pass the winter.  Apart from school and the staple visits to Gymboree and Southpoint Mall’s Kidzone, we discovered two Bounce House outfits a couple of miles from Chapel Hill (thank you Helene and Groupon).  It was perfect because Sam talks about the small set-up in her school all the time, and what better way to expend all that pent up energy than to bounce it out!

Here are my findings and thoughts about each one. 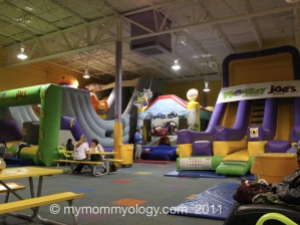 Bouncy House #1:  Monkey Joe’s. We felt we entered a jungle. It was so overwhelming, Sam took a good 30-minutes before choosing a piece of equipment she wanted to crawl into; and because of my very pregnant state, Dad had to crawl in with her each time.  Even in the smallest of bounce castles, I was too paranoid to let her go in by herself, because every other larger child’s jump sent her flying (to her delight).  She had absolutely no fear in joining the bigger kids climbing up the slides too (except she wouldn’t slide down alone or would only make it so far that she’d come tumbling down the marshmallow-like stairs).

While it really felt like a party place, as they had at least 10 different bounce set-ups to explore, it may have been better if specific times for play were set for kids 5 and below only (7 is also still too old). When you’re above 5, you already play differently and there is a higher risk that a younger child will get hurt.

We did like several things about the place though:  all units had a sign about being properly disinfected, and they were particular about grown-ups being allowed on the equipment, but not being allowed to bounce.  I suppose it preserves the equipment a lot longer if there is less weight bouncing on it.  There were also vigilant referees who would call the attention of overly excited older kids and keep them in check. 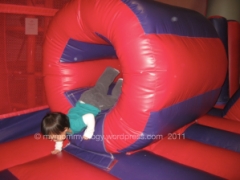 She had the bouncy tunnel all to herself.

Bouncy House #2: Bounce-U. We felt that the atmosphere here was tamer than that of the previous jungle.  There were more control protocols in place.  You had to reserve a slot for a specific time period so that they could count the children coming in each time.  Then, their entire set-up was divided into 2 rooms; and everyone was limited to room #1 for the first half, and moved to room #2 altogether after an hour.  Each room had only about 5 set-ups, so Sam tired of them much quicker than when we were at Monkey Joe’s.  Maybe they looked too similar to one another?

In the end both bounce houses made for a hungry and an exhausted toddler.  I don’t think I’ve had an easier time feeding her and getting her to bed when the day was over.  So all in all, they were good finds, for as long as you’re aware of the precautionary measures that need to be taken for younger children.

Since I had 2 hours to myself each time as father and daughter bounced away, I was also thinking about how such outfits would survive in Manila.  A lot of malls could profit from having set-ups like this for children!  For the right hourly price, and for as long as security, safety, proper maintenance, storage and hygiene standards are set in place, it might actually be something worth having, don’t you think?

(At a party in Manila where the host rented a bouncy house, a friend said her daughter came back smelling quite different after only an hour of playing on the equipment!  So of course, after each adventure, I would take a moment to smell my Sam.  No issues there thankfully, but I did give her a good scrub-down when we got home.  Which leads me to conclude that cleaning and caring for the equipment is really REALLY a must!)