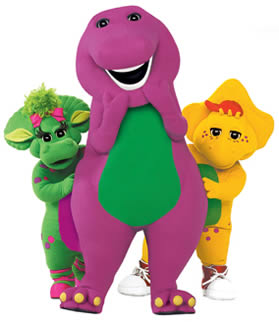 Am on the fence about this bubbly purple dinosaur.

For twenty years I’ve been trying to put a finger down as to why I am not entirely a fan of Barney and his friends.  I first encountered him long ago when my brother was two and would watch every single episode constantly.  Now it’s one of Sam’s most requested shows (along with Sesame Street and Super WHY!) on a daily basis.  As TV is one of our best friends, I worry about the educational value she gets from it vis-a-vis the entertainment value it has.  So in true Mommyology fashion, I tried to research about this purple dinosaur and pinpoint exactly why (or why not) I should let Sam watch it still.

Barney is a dinosaur from our imagination.  That is a line from the opening song and it’s true.  The videos that we watch go from castles to farms and all sorts of places, and so I feel it does in a way help build Sam’s imagination.  There’s no limit to where Barney and his friends can go.

Familiar songs. In a span of 45 minutes, there are at least 8-10 songs (including the endearing I Love You theme song that Barney always ends his shows with).  Some are very familiar songs too.  Watching it on Barney reinforces it in her mind.  Sometimes I’m surprised that she knows all the words to a Barney song and can sing it over and over.  They’re also very light and easy to remember.  Plus singing is a good way to learn for children, or so I’m told.

Some shows are educational. For instance, Barney Fun on Wheels is an episode that talks about the different kinds of transportation.  Sam loves this episode and I can see how it’s helped her appreciate planes, buses, trains and cars.  There’s another one with the colors of the rainbow and spelling out names that she loves, and yet another one about good lessons like truth and honesty and sharing via different stories (Dino-Tale I think is the name of the show).  Sam relates too what she sees in the real world to some of these shows and she can tell me exactly in which episode she’s seen it in too, “Just like in Barney mom!”

Baby Bop. She’s the three-year old dinosaur that I find quite irritating in every aspect.  The tone of her voice, the things she loves and cares about, they all feel very trivial and shallow.  She also comes across as spoiled and bossy.  In several shows it’s as if she picks on her brother BJ by making him wear princess outfits or butterfly outfits.

Thankfully Sam doesn’t seem to like her as much either, apart from the fact that she dances ballet.

Low Production Quality. Okay, maybe this is something that two-year olds really don’t care about, but it bothers me and I’m half the audience too.  Sometimes Barney takes them out to sea, or to a different country as part of their adventure.  The problem is you can see that it’s “fake”.  The water is clearly a drawing (It’s more glossy than the characters), and obviously the boat is not real too.  Sometimes the people from other countries don’t have the proper look or accent either.

Scary-looking Guest Characters.  There are episodes where Sam watches the show and in the middle of it, she runs to me in tears.  It’s not often, but it does happen.  It’s as if the producers aren’t as picky in screening some of the adults on the show or they let the costumes run a little bit overboard.

Everything feels exaggerated — too happy and perfect. I found this critique on the wikipedia definition of Barney which I think resonates how I feel about it.  It reads:

[H]is shows do not assist children in learning to deal with negative feelings and emotions. As one commentator puts it, the real danger from Barney is denial: the refusal to recognize the existence of unpleasant realities. For along with his steady diet of giggles and unconditional love, Barney offers our children a one-dimensional world where everyone must be happy and everything must be resolved right away.

I get that, because if I compare it to Sesame Street, while both are trying to be educational, Sesame Street deals with real problems and emotions.  Barney seems to be void of any major problems whatsoever.  And everyone just happily breaks into song and dance.

Also, I find the acting of the real people very fake.  While I know they are kids and they’re most likely told to project, it just feels they bob their heads a little too much, clap too much or giggle too much.  It becomes very unnatural and uncomfortable to watch.  Every time I see it I think about how these kids (now most likely fifteen years older) feel about their earlier performances.  Do they cringe in embarrassment?  Because I do!

Moving forward I think I will just continue to monitor the Barney shows Sam watches.  While there may be no permanent harm or damage, and it is not a bad influence per se, I still feel better that what she learns is balanced out by other things and other shows.  We will keep Barney for occasional entertainment value in the meantime, (since we all have that in our lives in some shape or form), and hopefully soon she will move on to characters and shows that will do her a whole world of better.